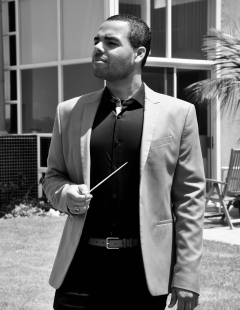 Brandon C. Di Noto is an American conductor, vocalist, composer, and educator based in Southern California. He earned two baccalaureate degrees, one in Music with concentrations in Composition, Conducting and Vocal Performance; and the other in Business Communication with concentrations in Marketing and Organizational Management; from Point Loma Nazarene University. While at PLNU, Di Noto served as the Assistant Conductor for the university’s Chamber Orchestra and Chorale, and was presented with the Outstanding Music Student award, the highest honor given in the department. He earned his Master of Music degree in Choral Music, with concentrations in Composition, Conducting, and Music Education, from the USC Thornton School of Music. While at USC, Di Noto sang with the USC Thornton Chamber Singers and served as the Associate Conductor & Teaching Assistant of the University Chorus.

As a composer, Di Noto is captivated by traditional and innovative methods of conveying musical narratives to his audience. He is interested in blending traditional and extended harmonies, as well as modern composition techniques with the many cultural musical traditions at his disposal, in his works. Di Noto’s composition mentors include: Neal Desby, Victor Labenske, Z. Randall Stroope, and Frank Ticheli.

Di Noto currently divides his time between San Diego and Santa Barbara, CA; as well as the myriad of locations his performance career takes him. He is currently pursuing a Doctor of Musical Arts degree in Choral Conducting at UC Santa Barbara; where he directs the Singing Gauchos choral ensemble and sings in the Chamber Choir. On the rare occasion when he is not involved in musical activities, Di Noto enjoys cooking, exercising, hiking, traveling, watersports, and spending time with his friends and loved ones.