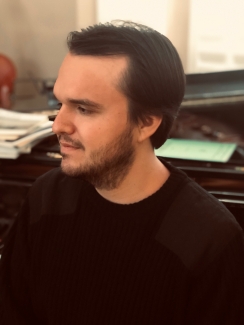 UC Santa Barbara alumnus William Geiler ‘20 was awarded First Prize in the Choral Division II (Ages 18 – 24) of the Metropolitan Youth Orchestra of New York’s 2020-2021 Emerging Composers Competition for his work The House of Dreams. Completed in November of 2020, The House of Dreams is a work for SATB (Soprano, Alto, Tenor, Bass) choir with piano accompaniment and is set to a text of the same name by American poet Sara Teasdale.

This year’s adjudication panel included Special Guest Panelist Daniel Ott, who currently serves on the faculty of both Juilliard and Fordham University, where he is Assistant Professor of Music Theory and Composition. Ott’s music has been heard all over the world, most notably at Carnegie Hall, Lincoln Center, the Kennedy Center, Sadler’s Wells, the Musée du Louvre, the Guggenheim Museum, and the Foro Internacional de Música Nueva in Mexico.

In Fall 2020, Geiler received a Bachelor of Music degree in Music Composition from the University of California, Santa Barbara, where he studied with Dr. Andrew Tholl. In addition to being a composer, Geiler is also a multi-instrumentalist and teacher, and is currently based in Washington state. Throughout his musical career he has been active within the realms of classical music, jazz, alternative rock, and gamelan, and often fuses these various musical passions in his compositions. As a composer he has received distinctions from Pikes Peak Young Composers, The Metropolitan Youth Orchestra of New York, AN ART ARTISTRY, NY Art Ensemble and the National Federation of Music Clubs.