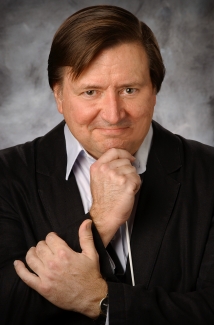 A review of Faculty Emeritus Jeremy Haladyna’s latest album, Pok-ta-Pok: Sky Games from the Mayan Cycle, is featured in the October 2021 issue of The Absolute Sound, a recognized source of expert reviews, features, and commentary on high-performance audio and music.

“Jeremy Haladyna’s career-spanning Mayan Cycle evokes a vanished world from fragments—what Brazilian composer Luigi Irlandini calls a ‘neo-cultural’ practice,” wrote Randall Couch in The Absolute Sound. “The pieces are programmatic: mimetic of cosmic structures and episodes from myth, legend, and ritual. The title cut of this third selection opens with the splitting of Cosmic Turtle’s shell, whence the listener plummets through rushing stars to land amidst the notorious sudden-death ball game in Chichen Itza’s stone court. Employing acoustic, electronic, and synthesized instruments along with vocalizations and processed samples of natural sounds, the album shows the influence of Haladyna’s mentor Henri Dutilleux in its angular, dynamic lines and unorthodox note clusters. Some pieces employ an equal-tempered chromatic scale. Others use one of three original scales that divide a frequency gamut according to Mayan calendrical/zodiacal math, yielding unequal intervals uncorrelated with western pitches. The final piece overlays all three scales so pitches from any are permitted, while three simultaneous tempi propel the concentric wheels of galactic time. The Mayan Cycle is an important essay in basing pan-American music on non-European premises, and a hugely atmospheric auditory experience.”

Pok-ta-Pok: Sky Games from the Mayan Cycle is now available for purchase and download from major outlets, including Naxos, Apple Music, Spotify, and more.

Haladyna retired from UC Santa Barbara in June 2019, after serving over 25 years on the Composition faculties of both the Department of Music and the College of Creative Studies. A laureate of the Lili Boulanger Prize and diplômé of the history-rich Schola Cantorum on Paris' Left Bank, he holds prizes and academic qualifications from three countries, as well as advanced degrees from the University of Surrey (U.K.) and the University of California. Haladyna began teaching undergraduate composition at UC Santa Barbara in 1991 and was named to its permanent faculty in March 2000. His own past teachers include William Kraft, Karl Korte, Eugene Kurtz, Jacques Charpentier, and Joseph Schwantner. Haladyna assumed the Directorship of the Ensemble for Contemporary Music in 2003 upon the retirement of William Kraft, and held that position until his own retirement in 2019.

View The Absolute Sound review as a PDF.