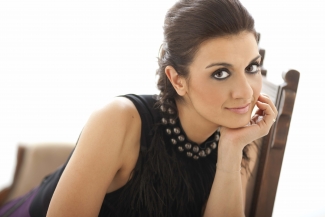 The album includes ten original songs written by Glass Tiger, including “An Every Day Wish,” which features Bayrakdarian as soloist.

“It was an honor, a thrill, and super cool to collaborate with Glass Tiger, alongside fellow Canadian artists that I truly admire,” shared Bayraydarian. “The holidays are very special to me and my family, and this opportunity to collaborate with Glass Tiger, and sharing this new album with you all is going to make this holiday season even more meaningful!”

Winner of five Juno awards and five Canadian Classic awards, Grammy-nominated Glass Tiger has shared the stage and recorded with some of the world’s leading acts including Rod Stewart, Tina Turner, Bryan Adams, Journey, Julian Lennon, and Cheap Trick. Founded in 1981 in Newmarket, Ontario under the name “Tokyo,” the band signed a worldwide record deal with Capitol Records in 1985, after which they changed their name to Glass Tiger. The band has produced five studio albums to date, including The Thin Red Line (1986), Diamond Sun (1988), Simple Mission (1993), 31 (2018), and 33 (2019).

Glass Tiger’s Songs For A Winter’s Night is available to stream and pre-order now here.

Bayrakdarian serves as Associate Professor of Voice at UC Santa Barbara, where she teaches voice and opera and directs the Opera Outreach Program. As a performer, she has appeared with the premier opera companies and orchestras in New York, Boston, Los Angeles, Paris, London, Vienna, Montreal, and more, under the baton of such eminent conductors as Seiji Ozawa, James Conlon, Michael Tilson Thomas, Alan Gilbert, and Nicholas McGegan. Bayrakdarian is the winner of multiple awards and competitions, including the Metropolitan Opera National Council Auditions (1997), Plácido Domingo’s prestigious Operalia competition (First Prize, 2000), and four consecutive Juno Awards. Her versatility is also reflected in being the featured vocalist on the Grammy Award-winning soundtrack of the blockbuster film The Lord of The Rings: The Two Towers, and on the soundtrack of Atom Egoyan’s Ararat.