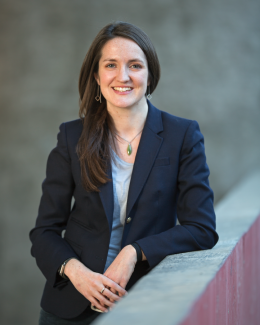 UC Santa Barbara faculty member Dr. Martha Sprigge was awarded tenure and was promoted to Associate Professor of Musicology on July 1, 2021, having joined the Department of Music faculty in Fall 2015 as an Assistant Professor. Dr. Sprigge holds a PhD in music history and theory from the University of Chicago (2013) and a Bachelor of Music from the University of Toronto (2006). Before joining the faculty at UCSB, she held a postdoctoral fellowship in the University of Michigan’s Society of Fellows, where she was cross-appointed in the Department of German and the School of Music.

Dr. Sprigge is a historical musicologist whose research examines musical expressions of mourning, grief, and loss in Germany and Eastern Europe from 1945 to the present day. She is interested in how composers, performers, and audiences used music as an alternative to language in forming responses to the immense political, cultural, and individual upheavals induced by World War II and the Cold War. These research interests coalesced in her first book, Socialist Laments: Musical Mourning in the German Democratic Republic, published as part of the New Cultural History of Music series from Oxford University Press in April 2021. The book examines a vast repertoire of commemorative works to present a history of musical mourning in communist East Germany (1949–1990). Taking a site-specific approach to this repertoire, Dr. Sprigge demonstrates how music became a crucial outlet for processing loss in a country where the ruling Socialist Unity Party tightly regulated public expressions of grief. Working on Socialist Laments led Dr. Sprigge to explore the role of gender in memorial practices. She recently began a new research project on musical widowhood, which examines how the relationship between gender and archival practice has shaped the historiography of twentieth-century European art music.

In the Department of Music, Dr. Sprigge teaches a range of undergraduate courses in music history, where students learn about musical practices within their cultural contexts, as well as the act of writing (music) history itself. At the graduate level, her courses are interdisciplinary. Students in recent seminars have explored the relationship between music and trauma, cultural memory, and death studies. She has enjoyed working with, and learning from, students in her courses over the past six years, and looks forward to developing new courses in the future.