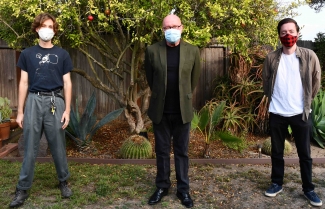 The Center for Research in Electronic Art Technology (CREATE) at UC Santa Barbara has released a new software app for sound granulation: EmissionControl2 for MacOSX, Linux, and Windows. EmissionControl2 is a granular sound synthesizer. The theory of granular synthesis is described in the book Microsound (Curtis Roads, 2001, MIT Press). Granular synthesis is one of the most important methods of sound design.

Features of the software include:

The new app was developed by a team consisting of Professor Curtis Roads acting as project manager, with software developers Jack Kilgore and Rodney DuPlessis. Kilgore is a Computer Science major at UC Santa Barbara. DuPlessis is a PhD student in Music Composition at UC Santa Barbara and is also pursuing an MS degree in Media Arts and Technology.

“Professor Roads and his team worked for 20 months on this outstanding project,” said Professor JoAnn Kuchera-Morin, Director of CREATE. “It is the ultimate granulator,” said Roads, who teaches electronic music at UC Santa Barbara and is also Associate Director of CREATE.

EmissionControl2 is a free and open-source software download available here.

The project was supported by a Faculty Research Grant from the UC Santa Barbara Academic Senate.

News release courtesy of the Center for Research in Electronic Art Technology (CREATE).