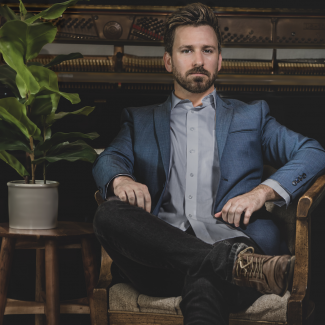 UC Santa Barbara Composition alumnus Dr. Brandon J. Rolle’s debut album, Glitch Portraiture, will be released by Arpaviva Recordings in November 2021. The album is being produced through support from the Alice M. Ditson Fund of Columbia University and the Arpaviva Foundation.

Glitch Portraiture will feature five recent electroacoustic chamber works that exhibit Rolle’s distinct approach to integrating technology with acoustic performance. The record includes several works composed during Rolle’s time as a PhD student at UC Santa Barbara, along with new works including an electroacoustic chamber concerto for which the album is named.

The Arpaviva Foundation writes of the upcoming album: “Glitch Portraiture debuts the mesmerizing sound world of the young American composer Brandon J. Rolle. Rolle’s music is as intense and immersive as it is intelligent: incorporating psychoacoustics, electronics, and computer programming into the compositional process, this music achieves a sensory-forward experience that emphasizes the shared human experience. The album features five recent, unreleased, chamber works by Rolle that demonstrate his distinct approach to combining electronic and acoustic instruments: Residual Energies (two electric guitars and live electronics), Impulse (viola and electronicist), für Klarenz (piano and fixed media), Sovrimpressione (string quartet and electronicist), and Glitch Portraiture (violin solo with MUGIC™ sensor, string quartet, electronicist). Individually, these works are intimate and intricately-crafted explorations of our relationship with technology; together, they represent a timely and important statement on how technology can lead us back towards what makes us human in the first place.”

Rolle’s creative output includes chamber, orchestral, electro-acoustic, and intermedia music, which have been heard at galleries, festivals, and concerts of new music across the United States and Europe. This season’s highlights include the Los Angeles premiere of Rolle’s Impulse at the Hear Now Music Festival, the recording of a new electro-acoustic chamber concerto written for Mari Kimura and featuring her recently-released MUGIC™ performance sensor, and an audio-video collaboration with visual artist Christopher Richmond. Rolle’s previous collaboration with Richmond, Hyperway, which premiered at the Moskowitz Bayse gallery in 2018, was acquired last year by the Los Angeles County Museum of Art (LACMA) as a part of their permanent collection. In 2021 and 2022, Rolle will continue work on a commission for creating the live electronics to Joel Feigin’s new opera, Outcast at the Gate.

In addition to his compositional work, Dr. Rolle is a conductor who champions the works of living composers, and a dedicated teacher with experience in both traditional and innovative music curricula. In 2018, Rolle co-founded the Impulse New Music Festival, a non-profit that provides intensive training and support to early-career composers and performers working in new music, where he serves as Artistic Director. An active member of the Los Angeles music community, Rolle has contributed as Modern Music Writer at the new music blog NewClassic.LA, is a part of the teams at Brightwork New Music and Equal Sound, and is a photographer for local artists and concert series.

Rolle received a PhD in Composition in the Spring of 2019 from the University of California, Santa Barbara. He also holds an MA degree in composition from Mills College and undergraduate degrees in music and political science from California Polytechnic State University, San Luis Obispo. His primary teachers were Pauline Oliveros, Roscoe Mitchell, Clarence Barlow, and Joel Feigin. Rolle lives in Los Angeles where he works as a freelance composer and teaches a private studio of composers. His compositions are published by Precious Noise Music.