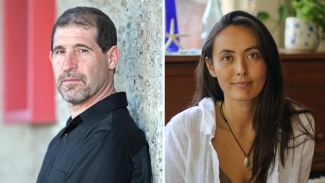 UC Santa Barbara Continuing Lecturer and alumnus Dr. Jon Nathan (Doctor of Musical Arts, 1998) and alumna Sio Tepper ‘14 received recognition during the 2020 BroadwayWorld Theatre Awards of the Decade Santa Barbara Regional Awards for their work with the Santa Barbara High School Theatre Program. Nominations for the awards were submitted by members of the BroadwayWorld community and winners were selected by popular vote.

The Santa Barbara High School Theatre Program was named the Theatre Company of the Decade, and was recognized for numerous production aspects such as musical production, set design, lighting design, costume design, and more. Overall, the program received 10 out of the 20 awards given in the Santa Barbara Regional Awards.

See below for a listing of awards given to Santa Barbara High School:

Sound Design of the Decade - Jon Nathan and Sio Tepper, In The Heights (2018)

Musical Production of the Decade, Matilda (2019)

Director of a Musical of the Decade - Otto Layman, Matilda (2019)

Dr. Nathan joined the faculty at UC Santa Barbara in 1995, as Director of the UCSB Jazz Ensemble and also as director of the Percussion Ensemble and Studio Percussion in 2000. More recently he developed the general education class Music 16: Listening to Jazz, which consistently is filled with students interested in this American musical art form. He also holds a Doctor of Musical Arts degree in Percussion from UC Santa Barbara, where he studied with Professor William Kraft.

Tepper received a Bachelor of Arts degree with an emphasis in Ethnomusicology from UC Santa Barbara in 2014. She worked primarily with Dr. Scott Marcus, Dr. Jon Nathan, and Dr. Timothy Cooley. Tepper now works professionally in southern California, with Santa Barbara as her homebase. She is currently working on a compositional collaboration with the UCSB Dance Department, and is co-writer, co-director, and composer for a community arts film called “Labyrinth," in collaboration with the Community Arts Workshop (to be released in late winter). She teaches privately and in workshop settings, and works as an accompanist and performer. Learn more about Tepper on her personal website, sioteppermusic.com. Tepper is also available on Instagram (@siobear) and Facebook (facebook.com/sio.tepper.music).