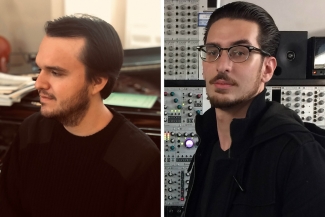 For the 2019-2020 award cycle, Geiler received the undergraduate award for his piece April Fog for clarinet in B-flat and piano, in the Solo or Chamber Ensemble category. Geiler describes the piece as “a tone poem inspired by the springtime fog of Santa Barbara, CA.”

Radna received the graduate award for his piece Convergences in the Solo or Chamber Ensemble category, as well as for his piece Trapdoors for the Electronic/Audiovisual category. Radna notes that “Convergences is a study of texture, density, and blending between acoustic and electroacoustic sound. The ensemble plays from an indeterminate score that specifies ranges of musical parameters, highlighting areas of similarity among extended techniques available in the given instrumentation. The electronics analyze features of the instrumental performance and generate sound based on it, amplifying the sense of sonic ambiguity while transcending timbral, gestural, and spatial constraints. The result is a simultaneous development of the same material in both domains, with the electronics serving to modulate the textural density and timbral diversity of the hybrid performance throughout.”

For his second piece, Trapdoors, Radna notes that the work “weaves an abstract sonic narrative from transformations of a limited set of sound objects and variations on simple gestures articulated by echo, reverberation, and spatialization. The material of the piece includes processed instrumental sounds, field-recordings, computer-generated sound, and recordings of an EML-200 modular synthesizer. Trapdoors was recently remastered and reimagined in an octophonic version, which had its premiere at UCSB in Fall 2019.”

William Geiler (b. 1998) is a composer, multi-instrumentalist and teacher based in Southern California who currently studies Music Composition at the University of California, Santa Barbara. Throughout his musical career he has been active within the realms of classical music, jazz, alternative rock and gamelan, and often fuses these various musical passions in his compositions. As a composer he has received distinctions from Pikes Peak Young Composers, M.T.A.C.’s Composers Today, AN ART ARTISTRY, NY Art Ensemble and the National Federation of Music Clubs.

Radna also has extensive performance experience on guitar, bass guitar, keyboard, and electronics, and has appeared at venues such as The Hollywood Bowl, REDCAT, The Center for New Music, and the Time-Based Art festival. He has completed several tours of North America, the UK, Europe, and Japan with the independent bands Kristin Kontrol, Light Asylum, Ice Choir, and The Depreciation Guild.

Radna holds an MFA in Electronic Music and Recording Media from Mills College, and is currently pursuing a PhD in Music Composition at UC Santa Barbara.