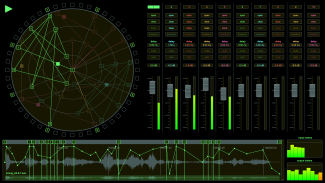 The Department of Music, in association with the Center for Research in Electronic Art Technology (CREATE), has released Space Control, a new software application for sound spatialization. Space Control is a multitrack workstation dedicated to the design, realization, and mixture of spatial gestures for electroacoustic music composition. With its simple interface and minimal learning curve, it makes quick and powerful spatialization available to users of all experience levels.

Features of the software include:

Space Control was created by the team of Professor João Pedro Oliveira, acting as project manager, and software developer Raphael Radna. Radna is a PhD candidate in Music Composition at UC Santa Barbara, and is also pursuing the MS in Media Arts and Technology.

The software was developed over a period of 2 years and released in June 2022. It is built in the visual programming environment Max/MSP, with custom interface elements coded in Javascript, and core audio functionality carried out by external objects written in C++. Radna and Oliveira have presented Space Control at the International Computer Music Conference, the Visiones Sonoras International Festival of Music and New Technologies, and the SEAMUS National Conference.

Space Control runs on Apple computers, and is available as a free download from CREATE.

The project was supported by a Faculty Research Grant from the UC Santa Barbara Academic Senate.