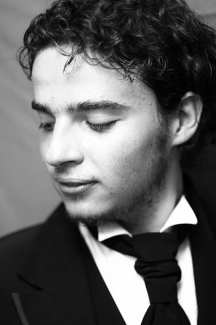 Italian pianist Alvise Pascucci has been defined by music critics as an outstanding young pianist who possesses a virtuoso technique as well as musicianship of a high order. His repertoire covers a wide range from Baroque to contemporary music. To date he has been awarded over 60 prizes in National and International competitions, now including his First Prize in the 2nd International Franz Liszt Center Piano Competition, earned by a perfect score.

The Franz Liszt Center for Special Talents is a high-level musical education and preparation for national and international competitions, concerts and piano recitals, always in the field of classical music.

Alvise has performed in various venues, including Steinway Hall in London, UK, Military Circle Hall in Ploieşti, Romania, Teatro degli Industri of Grosseto, Italy, Dar Sebastien in Hammamet, Tunisia, and the Gnessin Academy of Music concert hall in Moscow, Russia. He has played as a soloist with several orchestras including Orchestra Città di Grosseto, the Taipei Philarmonia Orchestra, and the Philharmonic Orchestra of Ploiesti. His 2019 commitments included concerts in New York at the Weill Recital Hall of Carnegie Hall, Taiwan and Italy.

Demonstrating his musical versatility, in addition to the piano, Alvise started to learn the violin at the age of nine. After graduating in September, 2006 from St.Cecilia conservatoire in Rome in violin, Mr. Pascucci decided to concentrate on his piano studies and completed his degrees in the R. Franci conservatoire of Siena, P. Mascagni Conservatoire of Livorno, International Piano Academy of Imola, and Trinity Laban Conservatoire of London. In 2017 he relocated to Indiana, where he obtained a Performer Diploma from the Jacobs School of Music at Indiana University, studying with Roberto Plano. He is currently working towards his DMA at UC Santa Barbara with Paul Berkowitz, where he has been awarded the prestigious Chancellor’s Fellowship.

On behalf of the UCSB Department of Music, we congratulate Mr. Pascucci on this excellent achievement.