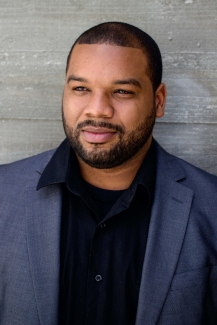 UC Santa Barbara doctoral candidate Byron Mayes was recently named a winner in the Vocal Category of the Music Academy of the West’s Digital Challenge, which took place as part of the 2020 Music Academy Remote Learning Institute.

For the challenge, Music Academy fellows were tasked with creating a short video that showcased artistic excellence and creativity, and also demonstrated technical proficiency in sound and video recording. Each fellow was equipped with a technology package and training provided by the Music Academy Remote Learning Institute.

A preliminary round of judging was conducted by 21C Media Group. Winners were then selected for each category: piano (for solo piano, vocal piano, and collaborative piano fellows), vocal (for vocal fellows), and instrumental categories. The winners were selected by a jury that included pianist Conrad Tao, violinist Jennifer Koh, Beth Morrison (Founder of Beth Morrison Projects), and Music Academy of the West Board Member Pamela Strobel.

“My Digital Challenge submission was based off of a poem by Langston Hughes entitled ‘I, Too, Sing America,’” said Mayes. “It has been my favorite poem for many years. It talks about the struggle of being viewed as different and less than because of one's color while still having hope that one day things will change for the better. It was set to music by 20th Century African-American Composer Margaret Bonds. I decided to tell the story through art. I illustrated the story on a uniformed background of an American flag. As I sing through the piece, you can see the story unfold through the animation. Though the poem was written in 1925, I believe the words and sentiments are still heavily felt by many today.”

Mayes was selected as a 2020 Vocal Fellow at the Music Academy of the West and a recipient of the 2020 Jean Rogers Full Scholarship in Voice. He is currently completing his Doctor of Musical Arts degree at UC Santa Barbara, where he studied with Dr. Linda Di Fiore.

American baritone Byron Mayes is a student at the University of California, Santa Barbara in pursuit of a Doctor of Musical Arts degree in Vocal Performance under the guidance of Dr. Linda Di Fiore. He received his Bachelor of Music degree in Vocal Performance from Columbus State University where he studied with Professor Earl Coleman. There he performed the roles of Belcore in Donizetti's L'elisir d'amore, Bill Bobstay in Gilbert & Sullivan's H.M.S. Pinafore, and Melchior in Menotti's Amahl and the Night Visitors. Following graduation, Byron performed with the Houston Grand Opera chorus, participating in HGO's productions of Verdi's Otello, Mozart's Die Zauberflöte, Tchaikovsky's Eugene Onegin, and Rodgers and Hammerstein's Carousel. As a member of the Opera Santa Barbara Chrisman Studio Artist program, Mr. Mayes has performed the roles of Crebillion in Puccini's La Rondine, Fiorello in Rossini's Il Barbiere di Siviglia, Sam in Bernstein's Trouble in Tahiti, and Dr. Gregg in Douglas Moore's Gallantry. At UCSB, he has performed the roles of Petrus in Jeremy Gill's Letters from Quebec to Providence in the Rain, Figaro in Mozart's Le Nozze di Figaro, and Philly in the American Premiere of Franz Lehár's The Mock Marriage. He was a 2020 Vocal Fellow at the Music Academy of the West and a recipient of the 2020 Jean Rogers Full Scholarship in Voice.