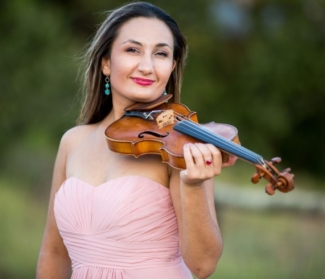 UC Santa Barbara Doctor of Musical Arts student Gulia Gurevich led the Classical Concerts on the Hill Concert Series into a new virtual format in 2021. Gurevich—who serves as Artistic Director—helped pivot the series, which normally presents in-person chamber concerts at the Hillcrest Center for the Arts in Thousand Oaks, to a completely virtual experience using the organization’s YouTube channel.

The first virtual concert took place on Sunday, January 17, 2021 as a YouTube Premiere via the Hillcrest Center for the Arts’ YouTube channel and featured pianist Xiao Chen. Chen, a soloist and chamber musician who has performed throughout the U.S., China, and Europe, holds degrees from Bard College, The Juilliard School, and UCLA, and is currently on the faculty at Mount Saint Mary’s University. Chen’s program included two pieces by Frédéric Chopin, as well as works by Johann Sebastian Bach and Robert Schumann.

Svetlana Smolina, a Russian-born pianist hailed for her “luxuriant” tone, was the featured soloist for the second virtual concert in the series, which took place on Sunday, February 21, 2021. Smolina has performed with orchestras and in solo recitals around the world, having appeared with the Mariinsky Orchestra at Carnegie Hall, the New York Philharmonic at Avery Fisher Hall, the St. Petersburg Philharmonic, and the Orchestre National de France. For her appearance with Classical Concerts on the Hill, Smolina performed works by Sergei Rachmaninoff and Alexander Scriabin. Gurevich also joined Smolina for a violin and piano sonata by Johannes Brahms.

Gurevich founded Classical Concerts on the Hill in the Fall of 2019, with the intention of presenting “world-class chamber groups and soloists to local audiences in an intimate setting.” The series presented eight concerts—featuring artists such as the Channel Islands String Quartet, pianist Anastasia Dedik, and members of the Los Angeles Opera Young Artist Program—before the COVID-19 pandemic forced the cancellation of in-person events in March 2020.

Gurevich is a violinist and a violist of the Prima Trio, a mixed ensemble, winner of Grand Prix and Gold Medal at the Fischoff Chamber Music Competition. As a soloist and a chamber musician Gurevich has performed in Carnegie Hall, Merkin Hall, Disney Concert Hall, and Benaroya Hall, and has worked with the major symphonies of Boston, Indianapolis, Charleston, and San Diego, as well as the Los Angeles Opera. Gurevich is a graduate of Indiana University and the Oberlin Conservatory, and is currently in her second year as a Doctor of Musical Arts student at UC Santa Barbara, where she studies with Lecturer Ertan Torgul.

Read more about the Classical Concerts on the Hill series here.