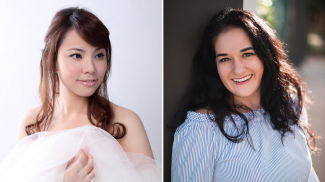 For her prize-winning performance in the PASF Competition, Ms. Chen performed the "fiendishly difficult" Fuga: Allegro con spirito; the fourth movement of American composer Samuel Barber's Sonata for Piano. Written in 1949, the work was first championed by virtuoso pianist Vladimir Horowitz and was commissioned by the League of Composers. Funding for the commission was provided by popular composers Irving Berlin and Richard Rogers. Barber's Sonata for Piano has remained a staple of the virtuoso piano repertoire for more than 70 years.

Dr. Merer performed the final aria, “Ved’ mé kroky” (Lead my steps), from Czech composer Dr. Sylvie Bodorová’s opera, Legenda o Kateřině z Redernu (The Legend of Catherine of Redern) (2014). Dr. Merer noted that "the opera, based in history, takes place in the early seventeenth century, at a time when the Austro-Hungarian Empire had taken over the Czech Republic. During this time, the Austro-Hungarians forced the people of the Czech Republic to convert from their native Protestantism to Catholicism. However, Kateřina—a Czech noblewoman—and her son, Kryštof, refuse to convert. Right before singing this aria, Kateřina convinces her son to flee the country to safety, but she stays to defend her homeland and her religion. In this aria, she uses the texts of several psalms to ask God for strength and to lead her down the right path." Dr. Merer shared that she first learned the piece when she traveled to perform in the Czech Republic in 2019, where she studied Czech diction with Dr. Timothy Cheek. Dr. Merer performed this aria as an opera scene with Dr. Bodorová in the audience.

Dr. Merer received her Master of Music and Doctor of Musical Arts degree from UC Santa Barbara (Spring 2021). She is a student of Dr. Linda Di Fiore.

The full competition is available to watch on YouTube or below: