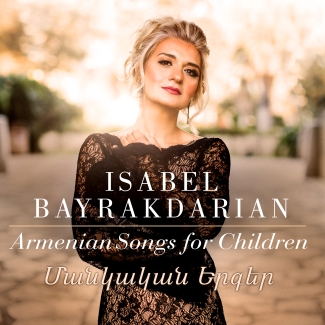 Professor Isabel Bayrakdarian’s most recent album, Armenian Songs for Children, has been put up for consideration for a Grammy Award nomination for “Best Classical Solo Vocal Album.” If awarded an official nomination on November 23, Armenian Songs for Children will appear in the “Best Classical Solo Vocal Album” category at the 64th Annual Grammy Awards, which will take place on January 31, 2022 at the STAPLES Center in Los Angeles.

"The seeds of this album were planted when I was very young, and would listen to my mother sing songs to me from a homeland that no longer existed...from a place that seemed so far away," shared Dr. Bayrakdarian. "The prayers, lullabies, and children’s songs she sang to me, were passed down generation after generation, eventually to my great-grandmother Isabel (after whom I was named) and my grandmother Marie, both survivors of the Armenian genocide and mass deportations. My mother sang them to me and my siblings, and today I continue the tradition and sing them to my children. These songs have shown me that music truly has the power to bridge the past and the future and the ability to give voice to those voices that were silenced prematurely because of race, ethnicity, and religion. There’s no better celebration of life, and survival, than through singing!”

Armenian Songs for Children is available to purchase, stream, and download at avie-records.com.

Dr. Bayrakdarian serves as Professor of Voice at UC Santa Barbara, where she teaches voice and directs the Opera Theatre productions as well as the Opera Outreach Program. As a performer, she has appeared with the premier opera companies and orchestras in New York, Boston, Los Angeles, Paris, London, Vienna, Montreal, and more, under the baton of such eminent conductors as Seiji Ozawa, James Conlon, Michael Tilson Thomas, Alan Gilbert, and Nicholas McGegan.

Dr. Bayrakdarian is the winner of multiple awards and competitions, including the Metropolitan Opera National Council Auditions (1997), Plácido Domingo’s prestigious Operalia competition (First Prize, 2000), and four consecutive Juno Awards. Her versatility is also reflected in being the featured vocalist on the Grammy Award-winning soundtrack of the blockbuster film The Lord of The Rings: The Two Towers, on the soundtrack of Atom Egoyan’s film Ararat, as well as a recent collaboration with the Canadian rock band Glass Tiger on their first-ever Christmas album Songs for a Winter’s Night.