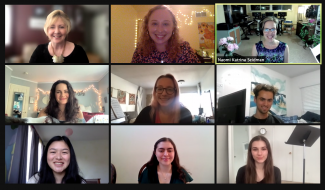 Preparing for four competitions, three recitals, individual weekly lessons, and a publication submission of an arrangement of Katherine Hoover’s Kokopeli for flute duet, flute majors managed to stay engaged, motivated, and inspired by peers and guests from all over the nation during COVID-19 pandemic virtual learning.

“The students were patient and tolerant with technical difficulties during remote instruction. We kept our sense of humor,” remarked Professor Jill Felber. “I wanted to reward the students with the honor to perform for some great flutists and to be able to connect my current studio with many former students. Amidst ‘call failed’, ‘poor connections’, ‘internet unstable’, wifi pauses, competitive/compromised bandwidth due to family sharing, FaceTime accelerations three times the speed during lessons, FaceTime sideways and upside down images, mp4s sent with mirrored images, Zoom cutting out, house alarms, power outages, echoes, and distortions of sound, we remained active and productive with many virtual guest seminars and masterclasses during COVID-19 remote instruction.”

“During one studio class, a student played a concerto movement by memory with barely a note heard," shared Professor Felber. "I let him continue just so he would have an opportunity to perform without interruption prior to a competition. We just watched his fingers move!”

With in-person events out of the question and virtual events the only option, the UC Santa Barbara flute studio was able to take advantage of the benefits of virtual events. Those benefits included the elimination of travel and lodging expenses, as well as the need to reserve a physical venue, which allowed the studio to invite guest artists and speakers to join them who, under normal circumstances, might not have been able to fly to Santa Barbara due to busy schedules and the logistical issues of traveling. Some events were available complimentary, some were funded by competitive application from international funding sources, such as Haynes University, and some were financed by Professor Felber’s Whole Flutes™ Seminar account.

“Nothing is as effective as in person instruction, but the weekly contact via Zoom and other platforms, kept us all connected and productive,” said Professor Felber. “The students loved the one on one nature of virtual real time lessons along with the opportunity to play for and support each other in Zoom classes.”