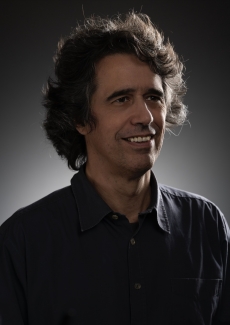 Oliveira’s La Mer Emeraude (2018) for fixed media was the winner of the Chicago Composers' Consortium Composition Competition, and was chosen from among 49 entries from around the world. The work was performed as part of the virtual Chicago Composers Consortium Electro-Acoustic Concert on October 29, 2020. The concert can now be viewed here. Oliveira’s notes on the piece are as follows: “Let us imagine a small invented world, a micro universe where everything exists...matter, energy, spirit, telluric movements, mysteries, natural and supernatural forces. That world is whole and from afar, whoever watches, sees it as a living ocean.” Oliveira composed La Mer Emeraude in the Musiques-Recherches studio and dedicated the work to Annette Vande Gorne and Francis Dhomont. The piece also received First Prize at the Cittá di Udine Competition and the Destellos Competition in 2020, as well as Second Prize at the SIME Competition in 2019.

The piece N’vi’ah (electronic music) was one of ten winners of the Sound Silence Thought International Composition Competition. Oliveira’s work was commissioned by the Ibermúsicas Project, composed at the Human Interaction Laboratory - Diego Portales University in Santiago de Chile, and dedicated to Federico Schumacher. Oliveira writes that the title, N'vi'ah, is a Hebrew word meaning prophetess. “A prophetess conveys one or more divine messages often in the form of inspired songs,” noted Oliveira. “And many times her words are cryptic, requiring interpretation or even translation. This work uses isolated phonemes as musical material. Intelligible words are not articulated, leaving to the listener the imagination of what their contents and meanings could be.”

Oliveira’s work Mosaic (2010) for piano and electronics was awarded Second Prize at the She Lives Budapest Prize International Composition Competition. Mosaic was selected from among 145 works from 36 countries by a panel of three judges including composer and chair László Tihanyi (Hungary), composer Alessio Elia (Italy), and pianist Krisztina Fejes (Hungary). Oliveira writes that “a mosaic is an image formed by small fragments of stone, wood, or other material. Each one of those fragments does not have a specific meaning by itself, its role is only revealed when we observe the formed global image. And each fragment of a mosaic usually has only one color. Mosaic, for piano and electronic sounds, uses a similar technique. The piece is composed by a succession of phrases and musical gestures of small dimensions. They gain meaning as the work progresses in time. Each one of these small gestures is almost an independent unit, and its musical material does not need to relate directly to what precedes and follows. It will be their succession in time that will reveal the ‘musical color’ of the piece.” Listen to the piece here.

Oliveira’s Full Moon for solo trombone received First Prize in the Trombone category at the Third International "New Vision" Composition Competition, which was hosted by New York Dance & Arts Innovations Inc. (NYDAI). Written in 2018, Oliveira notes that the work “is a piece about wolves. In the period of a full moon, wolves bark, howl, mate, fight among themselves and get restless. This piece was inspired in some of the sounds produced during those activities.”

Oliveira’s Tesseract (visual music) was also an Official Selection and received Honorable Mention at the Thomas Edison Black Maria Film Festival. “A tesseract, also defined as a hypercube, is the four-dimensional equivalent of the cube,” writes Oliveira. “This video presents a possible journey throughout the six faces of a cube, and how they can be transformed and projected into a tesseract using different processes: translation, rotation, fragmentation, explosion and implosion, etc.” The video was commissioned by Mixtur Festival (Spain). Watch the video here.