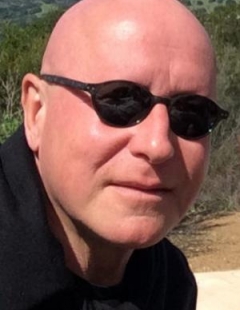 Dr. Curtis Roads is Professor of Media Arts and Technology and also Associate Director of the Center for Research in Electronic Art Technology (CREATE) at UCSB.

He has led masterclasses at the Australian National Conservatory (Melbourne) and the Prometeo Laboratorio (Parma), among others. He is co-organizer of international workshops on musical signal processing in Sorrento, Capri, and Santa Barbara (1988, 1991, 1997, 2000). He has served on the composition juries of the Ars Electronica (Linz) and the International Electroacoustic Music Competition (Bourges, France).

His research is focused on microsound synthesis (granular, pulsar, and related techniques), pluriphonic spatialization, notation and visualization of sound, and the history and aesthetics of electronic music composition. His research on dictionary-based pursuit of analyzing audio signals (with Bob Sturm, Aaron Mcleran, and John Shynk) was supported by a National Science Foundation grant (2007-2009).

In 2001, Roads and Alberto de Campo developed PulsarGenerator, a widely distributed application for sound particle synthesis. Together with David Thall, he developed EmissionControl (2005, updated 2008), a program for generalized granular synthesis.

His composition Clang-Tint (1994) was commissioned by the Japan Ministry of Culture (Bunka-cho) and the Kunitachi College of Music, Tokyo. His music is available on recordings produced by Asphodel, MODE, OR, the MIT Media Laboratory, and Wergo.

Pieces from his new set of music FLICKER TONE PULSE were premiered at the Festival Tage Neue Musik, Zürich, Switzerland in November 2009. They appeared on a new DVD on the WERGO label in 2019.

His book, The Computer Music Tutorial (1996, The MIT Press) is the best-selling textbook in the field, and has been published in French as L'audionumérique (Third edition 2016, Éditions Dunod, Paris) and Japanese (2001, Denki Daigaku Shuppan, Tokyo). The Chinese translation (2011, People’s Music Publishing House, Beijing) is a National Textbook of China.

A revised edition of The Computer Music Tutorial (The MIT Press) is also in the works.