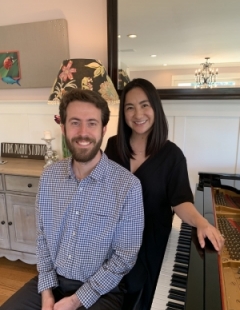 Benjamin Turk came to the Music Department at the University of California at Santa Barbara as a transfer student from El Camino College, where he was a winner of the El Camino College Concerto Competition and where he studied piano with Lois Roberts.

Dr. Turk completed his Bachelor of Music in Piano Performance under the guidance of Dr. Charles Asche.

While at UCSB, Dr. Turk was a winner of an Excellence-At-Entrance scholarship, and also an award from the Leni Fe Bland Scholarship competition.

After graduating from UCSB in 2010, Dr. Turk was awarded a scholarship for study in the M.M. program at the Moores School of Music at the University of Houston where he was a student of Nancy Weems.

Dr. Turk completed his doctoral studies in 2019. Ben is co-founder and full-time instructor at the Turk Piano Studios in Los Angeles, California.