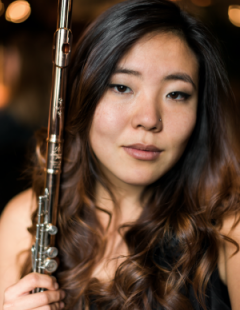 Carol Joe has accepted a position as a flutist in The U.S. Army Band “Pershing’s Own” in Washington, D.C., and will begin in the fall of 2016. Carol completed her Artist Diploma in Flute Performance at the University of Cincinnati College-Conservatory of Music in the spring of 2016, where she also received her Master of Music degree under the tutelage of Dr. Bradley Garner. Prior to attending CCM, Carol received her Bachelor of Music degree at the University of California, Santa Barbara, where she studied with Jill Felber and graduated with distinction in the major. Carol maintains an active private flute studio, and in addition to being a flutist, is also an avid yogi, a hiker, and an excellent cook.