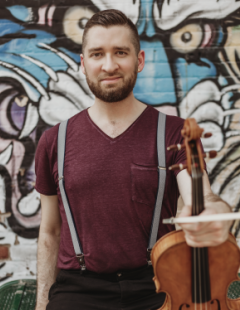 Jonathan Morgan is a violist specializing in the music of living composers, a member of the Isaura String Quartet, and a founding member and Executive Director of the Now Hear Ensemble, the Resident Ensemble at the UC Santa Barbara Department of Music. Jonathan served on the viola faculty at Cal Poly San Luis Obispo for the 2017-18 academic year. He is on the artist roster of the San Francisco-based record label Aerocade Music on which he released a recording of Nick Norton's Elegy II and is donating all proceeds from the recording to the ACLU. Jonathan has given world premiere performances of newly-commissioned music for solo viola at the Society for Electro-Acoustic Music in the United States (SEAMUS), Los Angeles City College, and has performed recitals - often as part of his CONGRUENCY series - at the Santa Barbara Center for Art, Science, and Technology (SBCAST), Synchromy, the New York City Electroacoustic Music Festival, the Eureka Musical Minds of California Conference, the Roy and Edna Disney CalArts Theater (REDCAT), the UCSB Summer Music Festival, and the Carlsbad Music Festival.

Jonathan has performed with the Opera Santa Barbara orchestra, and has served as principal violist of the Santa Barbara Choral Society, and the Santa Ynez Valley Master Chorale since 2015. In the recording studio, Jonathan has worked with RAYMOND, a boutique studio based in Buenos Aires and Santa Barbara, performing violin and viola tracks to TV commercials for the Argentine fashion house, VER. Jonathan is the featured soloist with the Choir of St. Barbara Parish, at the Old Mission Santa Barbara on their recent album My Hope is Arisen, released in 2015. Other works in Jonathan's discography include Made in California - the debut album of the Now Hear Ensemble - released in 2013, the Lament Cycle by Joel Feigin - performed by Helen Callus and the UC Santa Barbara Viola Studio - released on MSR Classics, 2012.

Jonathan has also performed with wildUp, as well as various orchestras throughout southern California. Prior to settling in California in 2010, Jonathan served on the violin, viola, and chamber music faculty at the Cleveland Institute of Music Preparatory and Continuing Education Department. Jonathan has participated in several music festivals, notably the Banff Centre where he was part of impromptu recordings later used in the 2008 Beijing Olympic Games Opening Ceremony. Jonathan holds a Doctor of Musical Arts from the University of California Santa Barbara, a Master of Music from the Cleveland Institute of Music, and a Bachelor of Music from the Peabody Institute of the Johns Hopkins University. His principal teachers and mentors include Helen Callus, Jeffrey Irvine, Lynne Ramsey, Victoria Chiang, Richard Field, WIlliam Preucil, Peter Salaff, and the Cavani Quartet.

Jonathan performs on a viola commissioned in 2006 from New York luthier Guy Rabut with bows by Bernard Walke, CodaBow, and CarBow. When appropriate, he amplifies his sound using a DPA 4061 microphone.