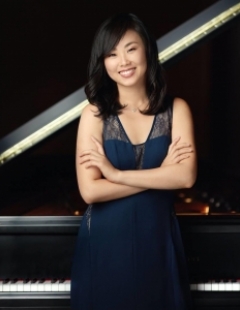 Dr. Patty Lee (Lum) graduated from the University of California at Santa Barbara Music Department as a Bachelor of Music Piano Major. Patty studied with Dr. Charles Asche. While at UCSB, she distinguished herself as a four-year recipient of the Carnzu Clark Scholarship award. She also received the Erno Daniel Award and the Music Affiliates Quarterly Performance Award. She was awarded a scholarship from the Leni Fe Bland Foundation, and was granted second prize in the Performing Arts Scholarship Foundation Competition.

Dr. Lee attended the University of Texas at Austin where she completed the M.M. and D.M.A. degrees in 2014. During her tenure at UT Austin, she studied piano with Nancy Garrett. She held Teaching Assistantships and was Assistant Instructor in both the Group Piano Program under Martha Hilley, as well as the Piano Pedagogy program and UT Piano Project under Sophia Gilmson.

In 2012, prior to completing her doctoral studies, Dr. Lee was appointed as Assistant Professor at Texas Lutheran University. She also served as Adjunct Professor at the University of the Incarnate Word and also at Concordia University Texas.

In 2016, she was invited to perform in recital at the annual Texas Music Teachers Association Conference, and has been active as a recitalist and chamber musician throughout the state of Texas.

In 2018, Dr. Lee met her future husband Calvin Lum and made the decision to leave her positions in Texas and return to her home state of California to be near her husband. She became a faculty member at the Opus One Music Studio in the Bay Area, and also participates as a faculty member in a unique and innovative program sponsored and administrated by the Community School of the Arts. The program organizes music study and instrumental lessons for current employees of the Google and Youtube Corporations.