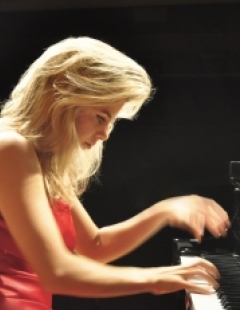 Slovenian-born pianist Petra Peršolja is currently a DMA student and Graduate Assistant at University of California, Santa Barbara, where she studies with Professor Paul Berkowitz. Ms. Peršolja holds a Master of Music in Piano Performance from University of Hawaii, Bachelor of Music in Piano Performance from Rowan University in New Jersey as well as a Bachelor of Music in Piano Pedagogy from the Academy of Music at University of Ljubljana in Slovenia. She has performed in masterclasses of pianists such as Gilbert Kalish (Stony Brook), James Giles (Northwestern), Kevin Fitz-Gerald (USC), Larisa Dedova (Maryland), Santiago Rodriguez (Miami), Sara Davis Buechner (Vancouver), Lovro Pogorelich ( Croatia), Konstantin Bogino (Russia) and others.

In November 2016 Petra won second prize in Los Angeles International Liszt Competition. Petra performed Sergei Rachmaninoff's Piano Concerto No. 2 with the UH Symphony Orchestra after winning the concerto competition at UH Manoa in Hawaii. She took 3rd place in NJMTA competition in Princeton and is the recipient of  numerous awards and prizes in Europe, such as the Brahms Award at the International Music Competition "Francesco Forgione" in Italy, Golden Award and Special Scarlatti Award at the Competition for Young Musicians of the Republic of Slovenia for solo piano as well as piano four-hands. In past years she studied and performed at the Northern Lights Music Festival in Minnesota and Exchange Program in Finland.