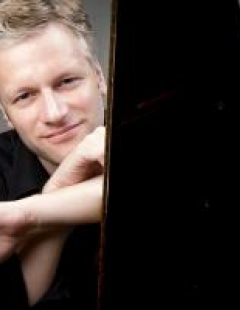 Philipp Richardsen was born in Vienna, Austria, and received his first piano lesson at the age of five. A prizewinner at the Austrian National Music Competition, he earned his Bachelor and Master of Music degrees at Vienna University of Music and Performing Arts, where he studied with Michael Krist. Additionally, he completed all course requirements for a Ph.D. in music history and obtained an undergraduate certificate from Vienna University, School of Law. He received his doctorate from the University of California, Santa Barbara, where he studied with Paul Berkowitz and became the first Austrian pianist to be awarded a Doctor of Musical Arts degree in piano performance. Refining his skills during postgraduate studies with Elisso Virsaladze (Moscow/Rome/Munich), he has received coachings from world-renowned pianists, including Richard Goode (New York), Murray Perahia (London), Pascal Devoyon (Paris/Berlin), or André Watts.

Dr. Richardsen was a recipient of a full scholarship, several awards, and the Dean's Fellowship at his alma mater. A list of international competition successes includes prizes at the Los Angeles International Liszt Competition, the Palma d'Oro Competition (Italy), and the Concours Grieg (Norway), where he won the Granados Special Award. His victory at the United States Open Music Competition in San Francisco was preceded by a first prize at an international piano contest in New York, which led to a 2005 debut performance at Carnegie Hall, hailed by the critics as "a scintillating blend of poetry and passion." His life and career have also been featured on television, where his appearance on Soundscape Series was broadcast all across the United States.

In March 2008, Dr. Richardsen was invited to join the faculty at Mokwon University, Daejeon, Korea, where he is currently serving as an associate professor of piano; additionally, he has been lecturing music history at Kookmin University and chamber music at Yonsei University, both in Seoul. Performance venues in Korea include Seoul Arts Center, Sejong Center for the Performing Arts, Kumho Art Hall, Youngsan Art Hall, Incheon Culture & Arts Center, Daejeon Arts Center, Bulguksa Temple, and many others. He has appeared on major national television and radio broadcasts (Arirang TV, Power Classics, Classic Odyssey, Masterpiece Scandal, Arirang Radio) and has recently been featured in an extensive profile interview in The Korea Times. His essay on the Korean music industry, "Beyond Gangnam Style," was published in the Koreana quarterly magazine and has received critical acclaim. Upon invitation by the Samsung Group, he has been a guest lecturer and coach at the company's Global Forum and Future CEO programs since 2011.

On the international stage, he launched his 2013/14 world tour, dedicated to Viennese composers and the music of Chopin, with a concert at the Summer Festival in Rovinj, Croatia; further solo recitals led him to the Sydney Opera House, Harpa (Reykjavík, Iceland), Vienna Musikverein, and Munich Gasteig. A more recent tour, entitled "Classics? Jazz? Tango!!," included performances in Asia as well as solo recitals at New York Carnegie Hall, Vienna Konzerthaus, and a return to the Harpa. In February 2014, he released his debut album called "Chopin 234," and since March 2015, he has been hosting "The Classical Collection," a weekly radio show about classical music, broadcast nationally in Korea on the TBS network.