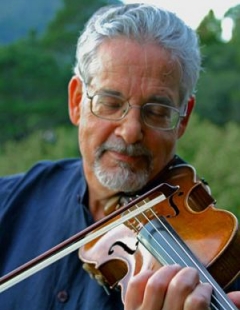 Yuval Yaron, one of today's great violinists, joined the music faculty at UCSB after over two decades of teaching at the Indiana University School of Music. From his first prizewinning performances at the 1975 Sibelius Competition in Helsinki, he has thrilled audiences on three continents in recital, in recording, and as soloist with major orchestras. Yaron has performed as guest soloist with distinguished symphony and radio orchestras such as Tokyo, Israel, Munich, Berlin, Mexico City, Frankfurt, Stockholm, Helsinki, Detroit, Cleveland, Baltimore, St. Louis, Montreal and Indianapolis. He has collaborated with conductors Zubin Mehta, Lorin Maazel, Klaus Tennstedt and James De Priest, among others. His recording on Accord of the Six Sonatas and Partitas of Bach received international praise. The Six Solo Sonatas of Eugène Ysaÿe, followed by the 10 Jewish Melodies were also recorded on the same label. Reviews of Baroque sonatas, including Tartini's famous Devil's Trill, remark "Yaron's superlative command of every aspect of violin technique is obvious in his virtuosic approach to the works on the disc”. Unabashed in his adherence to the grand school of violin playing advanced by his pedagogues, Josef Gingold and Jascha Heifetz, “Yaron's renditions are as sonorous as they are virtuosic." (The Strad, London, May 1999). Recently, a live performance of the Sibelius concerto with Klaus Tennstedt and the Symphonieorchester des Bayerischen Rundfunks (Profil) was released.

Yuval Yaron has been heard in recital in his native Tel-Aviv, Chicago, Boston, Los Angeles, Toronto, Basel, Hannover, Helsinki, and Reykjavik to great critical acclaim. In addition to the standard recital repertoire, he has performed extraordinary one-evening solo concerts of the complete Sonatas and Partitas of Bach. Recent performances included the Shostakovich, Bruch, Tchaikovsky, Brahms and Mendelssohn Concertos in Chile, Colombia and the US, as well as a recital in Helsinki, Finland, honoring the late journalist Daniel Pearl, that included Yaron’s own arrangement of Chasidic Melodies “Nigun”, and a fundraising concert for UCSB’s Virtuoso Fund entitled “Sweet Remembrance” at the Music Academy of the West, Santa Barbara, CA.