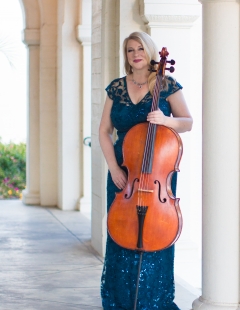 A graduate of The Juilliard School and a Fulbright Scholar, cellist Jennifer Kloetzel has concertized throughout the United States, Europe and Asia as a soloist and chamber musician. A founding member of the San Francisco-based Cypress String Quartet (1996-2016), Ms. Kloetzel has toured the globe and performed at such renowned venues as Lincoln Center, the Kennedy Center for the Performing Arts, the Chautauqua Institute and the Ravinia Festival, the Lobkowicz Palaces in both Vienna and Prague, as well as prominent colleges and conservatories worldwide.

Ms. Kloetzel is noted for her elegant playing and her vibrant tone. She is a sought-after recitalist, performing concerts for San Francisco Performances and on WQXR in New York. Strad Magazine hailed, “Cellist Jennifer Kloetzel is impressively passionate…” A fervent champion of new music, she has received the Copland Award for her work with living American Composers and has commissioned and premiered over fifty works, including five concertos written specifically for her. In the past few seasons, premieres included a Cello Suite by Daniel Asia, a Cello Concerto, “Cloud Atlas” and two unaccompanied cello works “Lift” and “Cricket the Fiddler,” which were both written for her by MIT composer Elena Ruehr and a Cello Sonata dedicated to her by Joseph Landers. The San Jose Mercury News proclaimed, “Cellist Jennifer Kloetzel shines in premiere” and called her a “terrific soloist…with a robust and earthy sound.” Ms. Kloetzel has recorded the Ruehr Cello Concerto with the Boston Modern Orchestra Project, which was released to critical acclaim in October 2014. “Lift” is the title track of an all-Ruehr disc, released on the Avie label, and was included on Keith Powers’ 13 Best Classical Music Recordings of 2016. Ms. Kloetzel is the featured cellist on a 2019 Albany Records release of music by Richard Aldag, and recently premiered Lee Actor’s Cello Concerto, written for her in 2017. In the upcoming seasons, she will give world premieres of sonatas written for her by composers Richard Aldag and Elena Ruehr and “Inferno: Double Concerto for Viola, Cello and Chamber Orchestra” by Joel Friedman.

Ms. Kloetzel is winner of The Juilliard School’s top award, the “Peter Mennin Prize for Outstanding Leadership and Achievement in Music,” and a Presser Music Award, as well as a Fulbright Grant to England. In 2004 she was honored with the McGraw-Hill Companies’ “Robert Sherman Award for Music Education and Community Outreach” in recognition of years of outreach work in schools and community centers. She has appeared at the Santa Fe Chamber Music Festival, the Sarasota and Aspen Music Festivals, the Britten-Pears School, the Prague Mozart Academy, and performed as cellist of the Cassatt Quartet during the 1995-96 season. From 2003-2009, Ms. Kloetzel taught cello and chamber music at San José State University, where the Cypress String Quartet was Ensemble-in-Residence. She has given master classes at The Juilliard School, San Francisco Conservatory and at universities throughout the U.S.

Growing up near Baltimore, Ms. Kloetzel began her cello studies at age six. Her teachers included Aldo Parisot, William Pleeth, Harvey Shapiro, Stephen Kates and Paula (Virizlay) Skolnick, as well as members of the Juilliard String Quartet, the Amadeus Quartet and the Cleveland Quartet. After performing with pianist Andre Previn at the La Jolla Chamber Music Festival, Ms. Kloetzel was invited to appear as one of his select “Rising Stars” for two seasons at the Caramoor Festival in New York.

Ms. Kloetzel has been featured regularly on National Public Radio’s “Performance Today” as both a soloist and a chamber musician and her performances have been broadcast on radio stations from coast to coast. A passionate recording artist with 36 CD releases to date, recent recordings include the entire cycle of Beethoven Quartets and Brahms Sextets on the Avie label. In 2021, Avie will release her recordings of Beethoven’s complete works for cello and piano with Robert Koenig. She performed as principal cellist of the Concert Artists of Baltimore, the Baltimore Opera and the Juilliard Orchestra under Maestro Kurt Masur. In addition, she is a frequent soloist with orchestras throughout the United States, performing works by Beethoven, Brahms, Dvořák, Elgar, Glazunov, Fauré, Ibert, Haydn, Hindemith, Lalo, Saint-Saëns, Shostakovich, Strauss, and Walton. In 2016, Ms. Kloetzel was invited to join the faculty at the University of California, Santa Barbara, where she serves as Professor of Cello and Head of Strings.