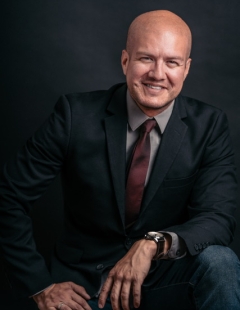 Juan Gallegos is a Southern California native and has a multifaceted career as a clarinetist, conductor, educator, and studio musician.

As a performer, Gallegos can be heard in major motion pictures such as Toy Story, Cars, Star Wars, Lala Land, The Gilded Age, Only Murders in the Building among many others. He is also frequently seen sharing the stage with some of Southern California's most prestigious orchestras such as the Los Angeles Philharmonic, San Diego Symphony, Los Angeles Opera, Pacific Symphony, and Santa Barbara Symphony – to name a few. As a champion of new music, Juan has participated in the world premiere performances of many new works including Brett Kroneing’s Fuego for clarinet and Guitar, an opera adaptation of Ingmar Bergman’s “Persona” by Kerrie Makan with the Los Angeles Opera, and “The Central Park Five” by Anthony Davis with the Long Beach Opera. Internationally, he has performed on stages all over Europe, South Korea, and the Sydney Opera House in Australia.

Gallegos is currently on faculty at the University of California, Santa Barbara, and the Schwab Music Academy at Ventura College. He has previously been on faculty at Riverside City College and was the Music Director and Conductor for the Diamond Youth Symphony Orchestra. Gallegos is frequently asked to also give masterclasses at universities around Los Angeles.