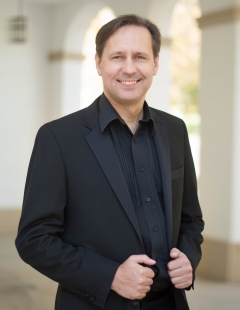 Ukrainian-born conductor Maxim Kuzin serves as music director of the University of California, Santa Barbara Chamber Orchestra, as well as Music Director of the Symphony Orchestra at Orange Coast College in Costa Mesa, California. He is a graduate of the Doctor of Musical Arts program at UCLA where he studied with Professor Neal Stulberg. Before arriving in the U.S. in 2014, Dr. Kuzin held concurrent positions in Ukraine as Music Director of the Reinhold Glier Kyiv Institute of Music’s Symphony and Chamber orchestras and Head of the Opera Department of Dnipro Glinka Conservatory of Music. He had also served as Music Director for Kryvy Rig Music Theatre and “Ricochet” New Music Ensemble of the National Composer’s Union of Ukraine, and worked as an assistant conductor at the National President’s Orchestra of Ukraine, the Kyiv National Operetta Theatre, and Opera Theatre of Tchaikovsky National Music Academy of Ukraine.

Dr. Kuzin combines passionate personality with a distinguished track record of professional, artistic, and educational achievements as a symphony and opera conductor. Discovery, interpretation, support of young talents, and performance of rare classical music by famous composers is Dr. Kuzin’s particular area of professional interests. At the same time, challenging established performance formats and creating new ways for audiences to hear and appreciate classical music is what Maestro Kuzin is known for.

Born in Kyiv, Ukraine in 1976, Maxim Kuzin began his music studies at the age of 7 when he entered the Lysenko Boarding Music School for Gifted Children specializing in choral singing and conducting with a piano minor. Upon graduating with honors, Dr. Kuzin entered the choral conducting program of the Tchaikovsky National Musical Academy of Ukraine which he also completed with honors. He continued his studies at the National Music Academy’s Opera and Symphony Conducting program under the guidance of Maestro Roman Kofman (Music Director of the Beethoven Orchestra Bonn and Bonn Opera in Germany in 2003-2006). Upon graduation, Maxim Kuzin earned his third honors diploma. His graduation concert with the National Philharmonic Orchestra of Ukraine included Berlioz’s Symphonie Fantastique, and was performed at the country’s main concert venue of the National Philharmonic Hall of Ukraine.

Dr. Kuzin is a recipient of the “Best Music Direction” prize from the Ukrainian Sicheslavna Festival of Theatres, has received Elaine Krown Klein Fine Arts Scholarship Award (2017-18), and was designated as an “Emerging Artist” by the League of American Orchestra’s Symphony Magazine in 2005.