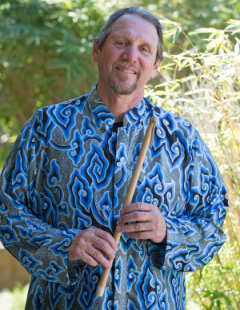 Richard North was hired in 2015 as a lecturer teaching Indonesian and Malaysian Gamelan music at the UCSB Music Department, within the World Music Performance series (A70J / A170J / A270J). He has been teaching and performing Gamelan music since 1972, having taught Gamelan at UC Santa Cruz, Hawaii Loa College in Kaneohe, Hawaii, at North Seattle Community College and at San Jose State University. Richard is recognized as an authority of the musical traditions of the ancient kingdom of Cirebon, Indonesia. He has made 10 trips to Cirebon since 1976, and has taught and lectured widely there about traditional Gamelan, including holding regular classes at the Kacirebonan Palace. He has received awards from the royal palace in Cirebon, as well as from the Indonesian government in recognition of his contributions to the preservation and growth of Gamelan music in Cirebon, and for his service to the people of Indonesia.

Richard also directs the Santa Barbara community gamelan group Sinar Surya, which has performed widely and has produced two commercial CD’s. (A third CD is in progress as of Winter 2017.)