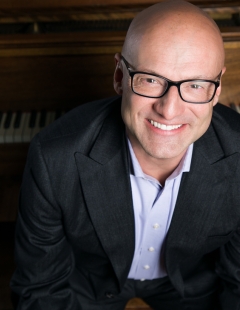 Mr. Koenig’s 2019-20 season includes performances at Cornell University in Ithaca, NY, The Forum in Harrisburg, PA, Bankhead Theater in Livermore, CA, and recitals in Copenhagen and Brussels. In addition to a southern California tour with well-known Camerata Pacifica, he will also perform Beethoven Triple Concerto with the Waynesboro Symphony Orchestra in Virginia.

A native of Saskatchewan, Canada, Koenig is a graduate of the Curtis Institute of Music in Philadelphia where he studied with renowned collaborative pianist Dr. Vladimir Sokoloff. In addition to his decade long association with the Juilliard School where he served as staff pianist, he was formerly Professor of Piano and Chamber Music at the University of Kansas in Lawrence, KS. Since 2007, Koenig has been Professor and Head of Collaborative Piano at the University of California Santa Barbara where he has served as the Chair of the Music Department and Head of Performance. In 2022, Koenig was appointed as the Artistic Director of the Palm Springs International Piano Competition. His summers are spent at the Interlochen Summer Arts Camp where he is Coordinator of Collaborative Piano.