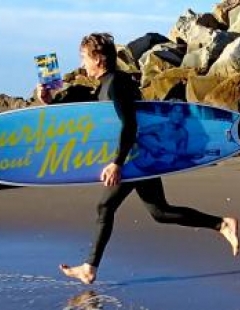 Tim Cooley specializes in vernacular and popular musics of Central Europe, especially Poland, and North America. His research interests include music and sports, tourism, and identities, the intellectual history of ethnomusicology, and ecomusicology. His most recent book is the edited volume Cultural Sustainabilities: Music, Media, Language, Advocacy (University of Illinois Press, 2019). Cooley’s previous book, Surfing about Music (University of California Press, 2014), was shortlisted for AMS’s Music in American Culture Award. His first monograph, Making Music in the Polish Tatras: Tourists, Ethnographers, and Mountain Musicians (Indiana University Press, 2005), won the 2006 Orbis Prize for Polish Studies (American Association for the Advancement of Slavic Studies). His book Shadows in the Field: New Perspectives for Fieldwork in Ethnomusicology, co edited with Greg Barz (Oxford University Press, 1997 and second edition 2008), has been a standard text for students of ethnomusicology for over two decades. He has published articles and chapters in encyclopedias and books such as The New Grove Dictionary of Music and Musicians, Cambridge History of World Music, Encyclopedia of Global Religion, the leading textbook Worlds of Music, and in academic journals such as British Journal of Ethnomusicology, European Meetings in Ethnomusicology, and the world of music. From 2006-09 he was the editor of the journal Ethnomusicology, and has served as the President of the Society for Ethnomusicology, and on the Board of Trustees of the American Folklife Center, Library of Congress.