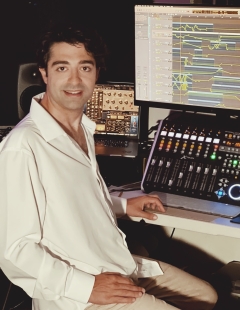 Deniz Çağlarcan is a Los Angeles-based composer, violist, and conductor initially from Istanbul, Turkey. He investigates the sonic quality of electronic music by any means and realizes this idealized environment as a model for his musical language. Çağlarcan’s music explores the interaction between acoustic instruments and electronic sounds within their sonic morphology. Besides, he is intrigued to create an environment by utilizing various immersive audio techniques as well as visuals and spatial elements that surround the audience. He performs interdisciplinary works collaborating with media artists, computer graphics developers, and machine learning engineers.

Besides his composition career as a violist, he performs in solo concerts, chamber music, new music ensembles, and popular music. He is also co-founder of the ADE Duo ensemble.

He studied orchestral conducting for over eight years, and at Central Michigan University, he continued very in-depth study with José-Luis Maúrtua.

He holds degrees in Master of Music in Viola Performance from Central Michigan University and a Master of Arts in Composition from Bilkent University.

Çağlarcan is currently a Ph.D. student in Composition studying with João Pedro Oliveira and Master of Science in Media Arts and Technology with Curtis Roads at the University of California, Santa Barbara.