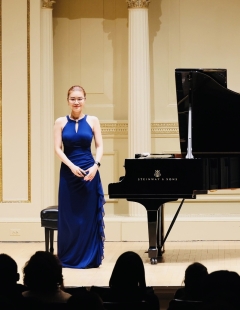 Her "variety of touching and color" was praised by Panayis Lyras (American classical pianist).  Throughout her virtuoso artistic journey, award-winning pianist Zhongxi Lin has been to concert venues in Asia, Europe and the United States.  Following the completion of her musicology bachelor's degree in 2014, Lin is now one of the most eagerly anticipated young pianists.  After graduating, Lin worked as an accompanist at Fujian Grand Theater where she performed in operas like On Mawei Slope and La Bohème.  She collaborated with some of the most well-known performers in the industry, including tenors Johnathan Tetelman and Warren Mok. Lin gained several masterclass experiences from some of the famous artists in the business, such as James Nicholas McGegan, Sheku Kanneh-Mason & Isata Kanneh-Mason, Victoria Mushkatkol, etc. Lin began appearing numerous at Carnegie Hall performing seasons as a solo and chamber pianist.

At Michigan State University's College of Music, where Lin continued her solo and collaborative piano master academic journey in the fall of 2017, by beginning her studies with Professor Deborah Moriarty, Professor Zhihua Tang, Professor Derek Kealii Polischuk and Professor Young Hyun Cho.  While pursuing her Doctor of Musical Arts (DMA) in Collaborative Piano at UC Santa Barbara under the tutelage of GRAMMY-nominated pianist and former department head, Professor Robert Koenig, Lin is also working as a Teaching Assistant for the department of music, UC Santa Barbara.