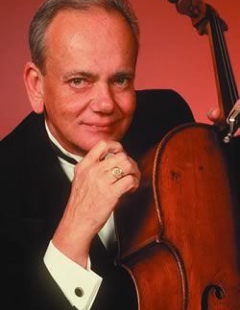 Geoffrey Rutkowski, Cello, retired from active teaching in 2012 and continued in the Fall of 2012 as a teacher of non-major Music History Courses ("Beethoven"). His impressive career took him to major cities in Europe and Southeast Asia for recital and concerto engagements. For two successive seasons he was invited to perform in the Maggio Musicale Fiorentino where he was Solo-Principal Cellist under such eminent conductors as Zubin Mehta, Riccardo Muti, Colin Davis and Mstislav Rostropovitch, in addition to performing solo and chamber music concerts with the esteemed Musicus Concentus. In the spring of 1985, at the invitation of the Ministry of Culture, he toured the People's Republic of China, giving master classes and concerts. Professor Rutkowski returned many times to Italy to perform recitals with the Italian pianist Giuseppi Modugno. In April, 2000 they recorded the two Brahms' Sonatas for the Ermitage Label and subsequently the Shostakovitch complete works for cello and piano and the Samuel Barber Sonata.

Mr. Rutkowski's former students hold important positions in Universities and in major orchestras such as the New York Philharmonic.

Mr. Rutkowski was a Distinguished Professor of Cello at the University of California, Santa Barbara. He played a Mateo Goefriller Venetian cello dated 1689.