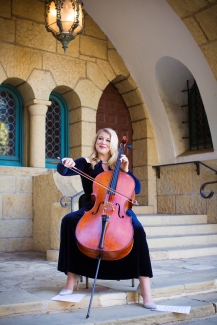 Professor Jennifer Kloetzel was featured on September 13 on the Houston-based arts podcast, Creative Peacemeal, which marked her second appearance for the series this year. Following Kloetzel’s initial interview with Board Certified-Music and Neurologic Music Therapist and educator Tammy Takaishi in late March 2021, which focused on Kloetzel’s career as a performer and educator, Takaishi was eager to continue the conversation and promptly scheduled Kloetzel for a second interview.

Released on September 13, this second interview covered a wide range of topics including  Kloetzel’s upcoming Beethoven CD release and her Bach commissioning project, the importance of live concerts and special relationship between an audience and a performer, how to curate a concert program, following creative impulses, managing stage fright and much more. Listen to the full podcast, “Jennifer Kloetzel, Cellist Part 2,” on the Creative Peacemeal website.