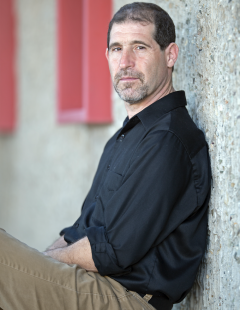 Director of the UCSB Jazz Ensemble, Jon Nathan has been a figure in the Santa Barbara musical scene since his arrival here nearly ten years ago. He holds a B.M. in Jazz Studies from the University of Massachusetts, Amherst, and an M.M. in Percussion Performance from Cal State University at Northridge. During his time there, he was introduced to William Kraft, and was asked to continue studies with Professor Kraft at UCSB, where he completed his Doctor of Musical Arts degree. Currently, Dr. Nathan is principal timpanist with the Santa Barbara Grand Opera Association as well as Director of Jazz Ensembles and Lecturer in Percussion and Percussion Ensemble at UCSB. He has also served as Principal Percussionist with the Santa Barbara Civic Light Opera, and continues to perform regularly with the Santa Barbara Symphony, as well as for other regional orchestras including Santa Barbara Chamber Orchestra and Santa Monica Symphony. Dr. Nathan was also the original drummer in the Animal Liberation Orchestra and in various jazz groups in Santa Barbara, including the Nate Birkey Quintet. He has served as Jazz Ensemble Director and Percussion Instructor at Moorpark College, has taught Techniques of Percussion at Westmont College, and was the Applied Music Percussion Instructor at Santa Barbara City College. He has also served on the faculty of the Jazz in July Improvisation Workshop, held on the campus of the University of Massachusetts at Amherst, with such jazz luminaries as Yusef Lateef, Dr. Billy Taylor, Sheila Jordan and the Turtle Island String Quartet.