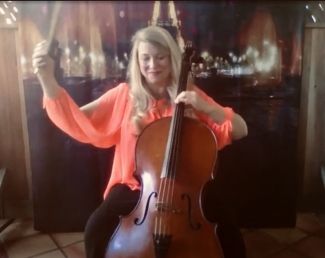 UC Santa Barbara Assistant Professor of Cello Jennifer Kloetzel was featured on the Performance Today radio program on Monday, September 28, 2020. Hosted by Fred Child, Performance Today is one of the most popular classical music radio programs in the country, broadcast on over 280 public radio stations with roughly 1.2 million listeners each week.

The September 28th program featured a recording of the first movement of Kloetzel’s solo performance of Antonín Dvořák’s Cello Concerto in B minor, Op. 104, B.191 with the Lexington Symphony, conducted by Jonathan McPhee. The concert was originally presented at Cary Memorial Hall in Lexington, MA on Saturday, February 15, 2020.

Listen to Kloetzel’s recording during Hour 2 of the show here.

Kloetzel also performed a virtual concert presented by the Gold Coast Chamber Players on their Bach Shorts series on Sunday, October 11, 2020 at 4 pm PST. Kloetzel’s program was titled "Bach Inspired," exploring 300 years of inspiration. The concert included a performance of Johann Sebastian Bach’s Suite No. 1 in G major, BWV 1007 for solo cello, an arrangement by Peter Wilson titled Bach to the Beatles, the Bach-Wilson Serenata (listen here), and the world premiere of composer Elena Ruehr’s Cricket the Fiddler (2020), which was inspired by Bach’s Suite No. 1. The performance was live-streamed via YouTube.

Learn more about Kloetzel’s upcoming events by subscribing to her newsletter here (scroll to bottom of page to sign up).