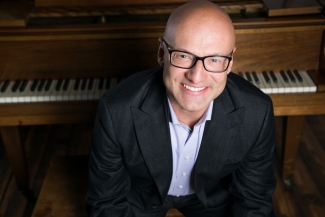 The chamber music program will feature highlights from Beethoven’s extensive repertoire, such as excerpts from his String Quartet No. 4 in C minor, Op. 18; Violin Sonata No. 5, Op. 24 “Spring”; Trio: Variations in C Major, “La Ci Darem la Mano”; Trio for Clarinet, Cello and Piano, Op. 11; and Marzelline’s aria from Fidelio. The program will also feature arrangements of his Trio, Op. 87 for brass trio; Sonatina in F Major, Ahn. 5 for solo marimba; and his Bagatelle No. 25 in A minor “Für Elise” for harp.

This intimate performance will feature Koenig as a special guest alongside soprano soloist Julia Metzler, an alumna of the Music Academy of the West and an Opera Santa Barbara Chrisman Studio Artist. They will be joined by the Santa Barbara Symphony’s concertmaster Jessica Guideri, principal cellist Trevor Handy, principal trumpet Jon Lewis, and clarinetist Juan Gallegos, as well as other symphony musicians.

Koenig will join violinist Jessica Guideri for the “Allegro” from the Violin Sonata No. 5, Op. 24 “Spring”; soprano Julia Metzler for Marzelline’s aria from Fidelio, and clarinetist Juan Gallegos and cellist Trevor Handy for the “Theme and Variations” from the Trio, Op. 11 for Clarinet, Cello and Piano.

The event will be hosted by Maestro Nir Kabaretti and can be streamed live on Saturday, November 21st at 7 pm or patrons can enjoy the event as a rebroadcast on Sunday, November 22nd at 3 pm.