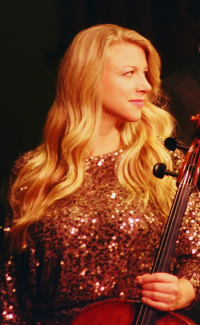 This spring, Professor Jennifer Kloetzel was featured in the Creative Peacemeal podcast series and the Cello Bello CelloChats series. Both interviews focused on Kloetzel as a performer and educator.

Board Certified-Music and Neurologic Music Therapist and educator Tammy Takaishi invited Kloetzel to record an episode for her Houston-based arts podcast Creative Peacemeal in late March. Takaishi’s podcast features creatives from a wide range of fields, including writing, art, film, lifestyle, culinary, and music. Past musical guests have included violinist Tracy Silverman and composer Jennifer Higdon. For the feature, Kloetzel and Takaishi spoke about cello, what inspired Kloetzel to play cello, mentors and idols, life during the pandemic, switching from being in a professional quartet to becoming a professor, and more. Takaishi also asked Kloetzel a few questions like, “What would her theme song be?” and “If she could have dinner with any historical figure, who would it be and why?". Listen to the full podcast, which was released in early April, here. Takaishi was so thrilled with the interview that she has asked Kloetzel to return for a second interview in July.

Kloetzel was also featured as a guest on an episode of CelloBello’s “CelloChats” on May 2, which was streamed live via Facebook and YouTube. Created by Paul Katz, CelloBello has become a valuable resource for cellists of all experience levels from around the world, and CelloBello’s virtual CelloChats have featured artists such as soloist Alban Gerhardt and Astrid Schween of the Juilliard Quartet. In the hour-long conversation, Kloetzel covered a wide range of topics, including technique, etudes, and summer festivals. The full video can be viewed on YouTube or Facebook.