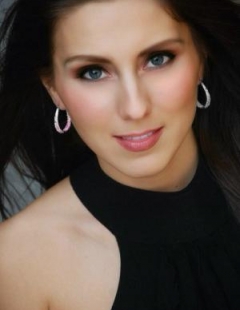 Known for her rich vocal color and expressivity, soprano Kara Covey shows promise as an up and coming singer.

This season, Ms. Covey’s engagements include singing Contessa in Le Nozze di Figaro with the Mediterranean Opera Festival, Annina in La traviata with Opera San Antonio, Rosalinda in Die Fledermaus with Texas Hill Country Opera, and the title role of Floyd's Susannah with Texas Concert Opera. She recently joined Alamo City Opera’s production of Speed Dating Tonight! and covered Mimì in Opera San Antonio’s La bohème. During the 2016-2017 season, she made her company debut as the Lady of the Creek in the world premiere of Las Fundaciones de Bejar and Ines in Il trovatore with Opera San Antonio.

She recently won the prestigious Metropolitan Opera National Council District Auditions and was a 2018 Metropolitan Opera Regional Finalist, where she received an Encouragement Award. Additionally, she was a Semi-Finalist in the 2017 Young Texas Artists' Vocal Competition.

On the concert stage, she has been a featured soloist in Schubert’s Mass in G, Mozart’s Requiem, Handel’s Messiah, Poulenc’s Gloria, and Bernstein’s Chichester Psalms. She received a Master of Music degree on a full-tuition academic and music scholarship from the University of California, Santa Barbara and a Bachelor of Arts degree from Pepperdine University.