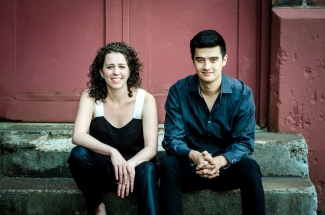 And the River, which showcases the most innovative and exciting works commissioned by and written for HOCKET over the past five years, will include works by Nina Young, Christopher Cerrone, Aaron Holloway-Nahum, Donald Crockett, and Gibson. Specifically, the funds will support the recording, equipment, and contracting fees for Donald Crockett's concerto, And the River, which was written for HOCKET in 2018.

“During the last five years, HOCKET has committed itself to the creation, performance, and sharing of new music for piano duo,” said Gibson. “Every piece on this album is a showcase of our artistic efforts. In particular, Crockett's concerto is written for a unique instrumentation—piano 4-hands/two toy pianos, and chamber orchestra—and was intimately workshopped with HOCKET throughout its conception. To have it be the centerpiece of our album just felt right. We are excited to record this and the other works, and to highlight how broad the definition of a piano duo can be.”

HOCKET has been lauded as "brilliant" by the LA Times' Mark Swed and has performed at such festivals as the L.A. Philharmonic's Noon to Midnight, MATA Festival, Other Minds Festival, and with the Eighth Blackbird Creative Lab. The duo has held residences at Avaloch Farm Music Institute and received grants from the Earle Brown Music Foundation and the Presser Foundation.