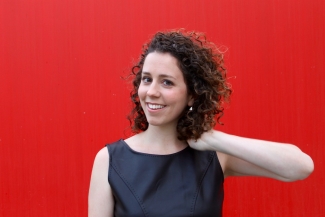 We spoke with Dr. Sarah Gibson about the upcoming concert she will be directing for the Ensemble for Contemporary Music, titled “Stay on It.” In this video interview, she discusses her inspiration for the concert’s program, her philosophy for directing the ensemble, and what she loves most about her ensemble members.

As the community celebrates the return to live performance, the UCSB Ensemble for Contemporary Music (ECM) will present a concert of chamber and ensemble works by Andy Akiho, Katherine Balch, Caroline Shaw, Julius Eastman, and others, which will make use of indoor and outdoor performance spaces. Directed by Dr. Sarah Gibson, the performance, titled “Stay on It,” will take place on Thursday, December 2, 2021 at 7:30 pm PT in Karl Geiringer Hall on the UC Santa Barbara campus.

How do you feel about directing your first live concert since the pandemic?

I am so excited to be in person, and to direct these fabulous students in person. While we took the challenges of last year and ran with them, and were able to put on some really great concerts remotely, the ability to be in the same room with each other— to respond to each other in the moment without thinking about a delay in sound—is other-worldly. It is so exciting to be back on campus and to be able to share this music live.

You will be presenting a concert of chamber and ensemble works by Derrick Skye, Andy Akiho, Katherine Balch, Eve Beglarian, João Pedro Oliveira, and Julius Eastman. Why did you choose these composers?

For example, we’re playing music by Derrick Skye and Katherine Balch, who are some of the young whipper-snappers in the field right now. And then we have some more established voices such as João Pedro Oliveira, who is actually the Corwin Chair of the Composition Department here at UCSB. Eve Beglarian, too, is a really interesting composer that I’ve been following.

Then Julius Eastman, who is actually the only non-living composer on the program, is an incredibly iconic composer. He was mostly active in the 70s. This piece “Stay on It” is this very important work, that is open instrumentation, meaning that any combination of musicians can play on it. I think it’s really exciting with our return back to the stage, that the Eastman piece is kind of a come-one, come-all. It’s also exciting that we’re representing this important composer who was provocative, and was also a black, gay composer who was very out with and proud about everything he was celebrating and fighting for. So I think that’s a really important voice to represent as well.

Is there a piece you’re particularly excited about?

It’s so hard to pick one piece over the other, and each instrumentation is quite different, which I think is really exciting. I’m certainly excited for João’s. This is a world premiere for João Pedro Oliveira’s work. And April Amante is premiering this work with Alvise Pascucci, her pianist. It’s going to be really exciting to hear that for the first time. I’m also excited to hear in the Akiho and in the Eastman—which are both open instrumentation works—this smorgasbord of different instruments that we don’t normally find playing together.  That, I think, is going to result in an incredible tapestry of colors.

The concert will make use of indoor and outdoor space. Can you elaborate on that?

So, I love that Santa Barbara has beautiful weather, and I love music that can also be outdoors! Especially in this time, right now, outdoors is a safe and comfortable place to be. In the idea of celebrating this return to the stage, I thought it would be really neat if the beginning of the concert begins outdoors, and then there’s a gradual move indoors. And so, I’m expecting, (though I don’t wanna give it all away), there’s gonna be some fun things that happen outdoors that wouldn’t normally come to mind if we were indoors. Everybody moving in together into the hall, just goes back to this celebration; we’re doing this, we’re all here together, so let’s move in these different fields in a way that we haven’t been able to in the last eighteen months.

What do you hope audiences will connect to when they attend your concert?

You know, I love hearing what people connect to after a concert. It’s always different! You know, every single person has their own way into different pieces. Whether they’re musicians or not, I think that that’s really exciting to hear what somebody who’s never heard music like this before—how it spoke to them. And to hear what they latched onto or what grabbed them. So, I don’t think that there’s one in particular thing that I’m looking for people to be grabbed by. I’m just excited to hear how the music affects them. I think all of these pieces have a strong voice. And they say something important. So I think that they will reach out to different people at different times.

What do you love most about your ensemble members?

I love working with all of the members of the ensemble so much. They all have various backgrounds and majors. You know, not all of them are music majors. Some are composers, we probably have some poli-sci majors, etc. It just brings in such a fresh take to the music that we’re looking at. And that also means that the students are really passionate about the ensemble. They want to participate. Because it’s not necessarily required for their major. And I would also say, being a contemporary ensemble, I love that not everything we do kind of fits into this idea of what people call the “canon” of standard music. We can do things that are off the regular path. And so, you might not have to be a performance major in order to participate. For instance, in one of the pieces by Katherine Balch that we’re playing, one of the parts is that a student puts their feet over gravel and makes sound with the gravel. And it’s a really interesting take. Nobody’s majoring in gravel right now, you know? Again, I think that it’s this fresh take that can be really creative, and has a lot of spontaneity in it. We do a lot of improvisation in the ensemble, and I just think it’s a great way to get to know the artistic and creative sides of all these students.

How can students get involved with the ensemble, and why should they?

Anybody can be involved in the ensemble! Just send me an email. We can talk about what you wanna do and how you might want to be involved. My mantra for this ensemble is that living in modern music is important, and it needs to be more present in everybody’s studies. If you’re going to be an artist right now, you need to know what’s happening around you. And all of these composers whose works we’re playing are responding to now. They’re responding to the time in which they wrote it. At some point, Beethoven was modern. Now we’re in the 21st Century. And all of these composers have something really important to say. I also think that anyone who wants to make music needs to have something important to say, too. So come join this ensemble, and we’ll figure out what we want to say together. I can’t wait to talk to anybody about it!

When and where is the concert?

For more information about the concert, ticketing information, and our COVID-19 Health and Safety Protocols, visit music.ucsb.edu/news/event/2303.

This interview has been edited for clarity since being transferred to a written format.