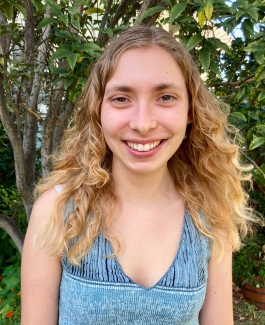 To be eligible for election to the UC Santa Barbara chapter, California Lambda, students must have taken courses across all three of the major divisions in the College of Letters and Science, including the humanities and fine arts, social sciences, and math, life, and physical sciences. The UC Santa Barbara chapter elects only about one percent of graduating seniors each year, and election in the junior year is extremely rare.

Pitsker, a fourth-year Music Studies and Environmental Studies major, has been on the Dean's honors list each quarter during her time at UC Santa Barbara and is part of the Letters and Science Honors Program. Last year, Pitsker was a recipient of the Duval Scholarship for Double Majors.

Pitsker has also played viola in the UCSB Chamber Orchestra and Pops Orchestra at UCSB for the last three years and volunteers with Giving Bach. She is interested in environmental and music education in addition to gender issues in music. In her free time, she likes to cook and post recipes on her blog.

During her final year at UC Santa Barbara, Pitsker will work with Associate Professor David Paul on her senior project and will continue to take viola lessons with Lecturer Jonathan Moerschel.