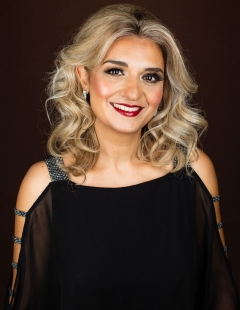 Dr. Bayrakdarian’s performing career was launched in 1997, the year she was a winner of the Metropolitan Opera National Council Auditions, and the same year she graduated from the University of Toronto cum laude with a biomedical engineering degree. In 1999, Isabel was engaged in Lyric Opera of Chicago’s world premiere production of William Bolcom’s A View from the Bridge.  In 2000, she won First Prize in Plácido Domingo’s prestigious Operalia competition. In 2002, Isabel made her debut with San Francisco Opera, as Valencienne in The Merry Widow, and also made her debut with the Metropolitan Opera in the New York premiere of Bolcom’s opera. A season later, she won plaudits as Teresa in the Met premiere of Berlioz’s Benvenuto Cellini. She was in demand for Mozart productions; Zerlina in Don Giovanni (New York, Houston, Salzburg), Susanna in Le Nozze di Figaro (Los Angeles, London), and Pamina in The Magic Flute (New York, Toronto). Her roles at her home-base theater, Toronto’s Canadian Opera Company, range from Gluck’s Euridice to Debussy’s Mélisande to Poulenc’s Blanche in Dialogues des Carmélites. Internationally, she sang in Monteverdi’s Poppea in Barcelona, Handel’s Serse in Dresden, and Janáček's Vixen in New York and Florence, and at the Saito Kinen Festival in Matsumoto, Japan.

Her versatility is also reflected in being the featured vocalist on the Grammy-award winning soundtrack of the blockbuster film The Lord of The Rings: The Two Towers, and on the soundtrack of Atom Egoyan’s Ararat. She collaborated with the electronica band “Delerium,” which garnered a Grammy nomination. She appeared in the BBC-produced short film HOLOCAUST – A Music Memorial Film from Auschwitz, which generated close to a million views on YouTube, and in her Gemini nominated film Long Journey Home, documenting her first visit to her homeland Armenia. Additional forays include her tango album and project Tango Notturno, a recording of Armenian medieval sacred music, In Joyous Light, and her recording of Manuel de Falla’s Seven Spanish Songs.

Dr. Bayrakdarian is the winner of four consecutive Juno Awards (Canada’s Grammy equivalent) for Best Classical Album (Vocal) for Azulão, a collection of Spanish, Brazilian, and Argentine songs, for Cleopatra, including baroque arias with Tafelmusik, a collection of songs by the nineteenth-century singer/composer Pauline Viardot Garcia, and Mozart Arie e Duetti. Her recording of Nonesuch CD Gomidas Songs, which was nominated for a Grammy in 2009, promoted and popularized the work of Armenian composer Gomidas Vartabed. Ms Bayrakdarian is the recipient of many other awards, including the Queen Elizabeth II Golden Jubilee and the Diamond Jubilee Medals, the Arbor Award from the University of Toronto, the George London Foundation Award, Canada Council’s Virginia Parker Prize, and the Republic Of Armenia "Komitas Medal", bestowed upon by the Minister of Diaspora, Dr. Hranush Hakobian. Most recently, she was awarded the “Movses Khorenatsi” medal - the Republic of Armenia’s highest cultural award - from the President of Armenia in celebration of Armenia's Independence, on September 21 2017.

Please refer to bayrakdarian.com/recordings for a complete list of recordings.