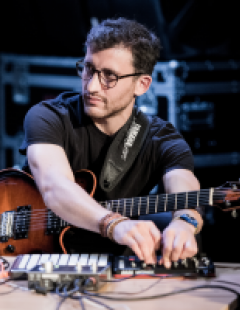 Diego Ratto (B. 1988, Alessandria, Italy) is a musician and composer currently based in Santa Barbara, CA. He received a Bachelor of Music in jazz guitar in 2016 and in electronic music in 2017 from Music Conservatory "A.Vivaldi" in Alessandria (Italy). He graduated from KMH - Royal College of Music in Stockholm (Sweden) with a Master of Music in electroacoustic composition in 2019. He is currently a PhD student in music composition at the University of California Santa Barbara (UCSB), with Professors João Pedro Oliveira and Curtis Roads.