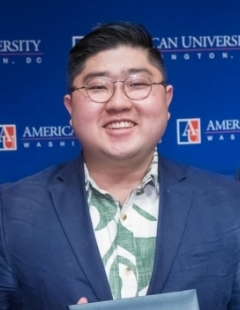 Daniel Oshiro is currently enrolled in the MA/PhD program in Ethnomusicology at the University of California, Santa Barbara where he is a Doctoral Scholars Fellow. He is interested in the nexus of power, race, ethnicity, and popular music as performed by Asian Americans. He pays special attention to the ways transnational markets complicate this research, with emphasis toward Japan, Hawai'i, and Southern California.

Oshiro received his undergraduate degree in Sociology and Music History from American University, receiving the Provost Outstanding Scholarship at the Undergraduate Level commencement award for his research on Korean American hip hop artist Dumbfoundead. In addition, he has received  the Academic Achievement Award for Excellence in Undergraduate Research or Creative Work by a Senior, the Carla Howery Award for Contributions to the Discipline, and the Austin Vanderslice Award from the Department of Sociology.

Oshiro has received several grants and fellowships sponsoring his research, including the Koster Foundation Summer Study Award which he received in 2017 and 2018. His most recent Koster Award sponsored ethnographic fieldwork in Hawai'i as part of a project that investigated aspects of performativity, ethnicity, indigeneity, and tourism in a (post)colonial context. He was also awarded the Ric Trimillos Award from the Society for Ethnomusicology to sponsor travel to the annual conference in Albuquerque, New Mexico.