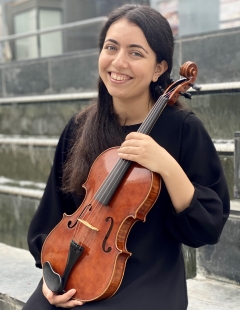 In between her bachelors and masters degrees, Sogol spent six months in Sweden playing with the Royal Academic Orchestra, Baroque Conspiracy, and Nya Kammarorkestern ensembles as their principal violist. She also spent an additional month in Prague playing in the Prague Summer Nights Festival Orchestra and performing in venues such as the Estates Theater and Rudolfinum. While an undergraduate, she performed as principal violist of the UC Davis Symphony Orchestra, guest principal violist of the Camelia Symphony in Sacramento, and co-founded the Video Game Orchestra at UC Davis. She is currently a violist and avid arranger for the Pops Orchestra at UCSB and a viola fellow with the California Young Artists Symphony.